The 6 Best Things to Do in Ubeda, Spain

Ubeda Spain is one of the jewel’s in Andalucia’s crown, an elegant and cultural town. Included on the UNESCO World Heritage list as an early example of Renaissance civic architecture, it’s an easy drive from Granada, Jaen, Carmona and Seville.

Things to Do in Ubeda, Spain

There are 36,000 inhabitants in Ubeda and the area is an economic hub for over 200,000 people. There’s actually a Spanish expression, andar por los cerros de Úbeda which translates literally as to walk around the Úbeda hills, which means to go off on a tangent.

You’ll certainly be spoilt for choice wandering around the town, with 48 monuments to admire.

For our road trip, we’d booked into some of Spain’s most historic hotels, the Paradors. These iconic properties are located in scenic areas and are often landmarks in their own right.

Úbeda Parador is situated right in the centre of the old town in a 16th century palace. The Palacio del Deán Ortega was originally built for Fernando Ortego, dean of Malaga Cathedral, but he died before it was completed.

This boutique hotel is located next to the Pantheon, one of Ubeda’s most impressive sights, on the pedestrian main square. Entering the Parador in Ubeda, Spain, you’re immediately struck by the sense of space in the covered inner courtyard.

The interior is filled with genuine antiques and our spacious room opened onto a Juliet balcony, overlooking a quiet courtyard. There was an attractive tiled floor, beautiful carved wood shutters and a good sized bathroom with two vanity basins.

It’s a pleasure to shop in Ubeda thanks to the pedestrianized streets and many stylish boutiques. The town is known for its handicrafts, with many pottery workshops that are open to the public.

The town is known for its handicrafts, with many pottery workshops that are open to the public. Ubeda ceramics are characterized by a deep green glaze which has Moorish origins. You shouldn’t leave the town without sampling the extra virgin olive oil and olive bread.

For sweet treats, try the borrachuelos pastries or some virolos, made from puff pastry with syrup cream and pumpkin. We were lucky to have a tour of the town with Pablo, who knows Ubeda like the back of his hand. He’s actually the town’s Festival Director but with his excellent English and local expertise, he’s often called upon to show around overseas visitors. 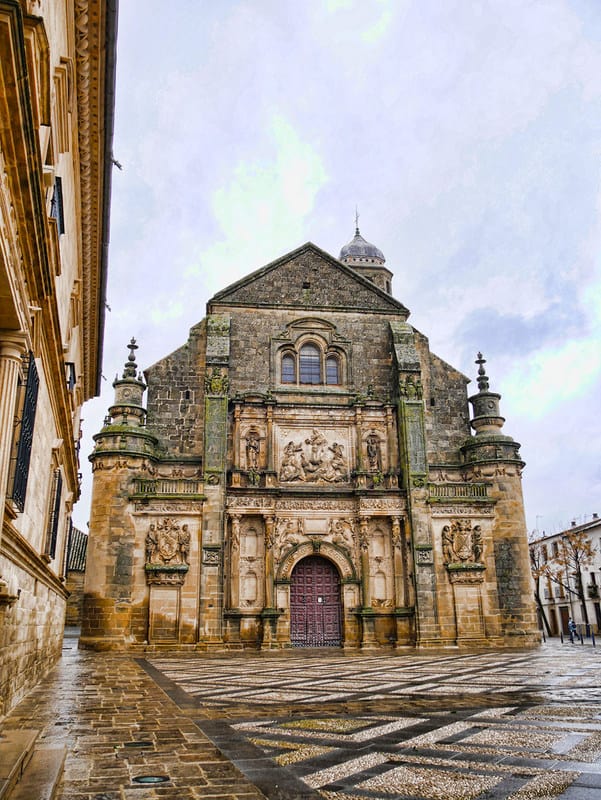 Known locally as the Pantheon, it was commissioned as a mausoleum by Francisco de los Cobos y Molina. Designed by celebrated Renaissance architect Andrés de Vandelvira, who also built Jaen Cathedral, it was built between 1536 and 1559.

These days it’s a Catholic chapel, owned by the Medinaceli family, descendants of the Cobos.

The Colegiata de Santa María de los Reales Alcázares is a short walk from the chapel and also located on Plaza Vázquez de Molina, the old town’s magnificent Renaissance square. There was previously a Roman temple on this site, then a Moorish mosque and the church itself was constructed from 1510 to 1645.

It was declared a National Monument in 1926 and is Ubeda’s main church. The barrel-vaulted ceiling is particularly impressive and was created in the seventeenth century.

Opposite the church is the Palacio Vazquez de Molina, another masterpiece by Andrés de Vandelvira, constructed between 1546 and 1565. It was commissioned by Juan Vazquez de Molina, secretary of State for Philip II and the nephew of Francisco de los Cobos,  and is now the City hall.

One of the best examples of Renaissance architecture in Spain, this is now the Town Hall of Ubeda. The building is also known as the Palace of the Chains, as there are chains in front of the building, together with two stone lions.

Palacio Vazquez de Molina is open from 8 am to 3 pm and 5 pm to 9 pm on Monday to Friday and from 9 am to 2 pm on Saturdays.

We were also fortunate to visit the Palacio de Vela de los Cobos during your Ubeda, Spain trip. Whilst it’s true that the palace itself has some impressive heirlooms, what makes it so special in our eyes is that the owner showed us around.

The owner of this private residence which is not normally open to the public has worked hard with the local municipality to preserve the palace and his former bedroom is exactly as it was when he was a young boy.

The library is a truly impressive space with many first editions and is particularly popular with scholars.

What a great ending to a fabulous visit. Ubeda is somewhere that we’d highly recommend visiting for its timeless elegance and old school charm.

We have it on good authority that the tapas are excellent too. If you have the opportunity to visit in May or June, then don’t miss the annual dance and music festival featuring jazz, flamenco, chamber music, opera, symphony orchestra and dance.

Getting to Ubeda, Spain

There are several ways to get to Ubeda, and the closest international airport is Federico García Lorca Granada Airport, 140 kilometers from Ubeda. You could also fly into Malaga, which is 230 kilometers away or to Madrid-Barajas or Seville.

A good way to visit Ubeda is as part of an Andalusia road trip. We suggest starting with a visit to the Alhambra, Granada, then travelling on to Jaen before arriving in Ubeda.
From here, travel to Carmona and then finish with 48 hours in Seville. If you have time, then Sierras de Cazorla, Segura y las Villas Natural Park is another great option, an hour and a half away from Ubeda.

Have you ever visited Ubeda, Spain?

Pin this Ubeda, Spain guide for later or share with friends if you’ve found it useful.